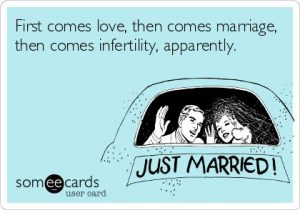 For my posts on infertility, see here:

My husband, Jeff, and I met in 2006 and married in 2007. Jeff is a wonderful, fun, smart, and caring man, and I feel grateful to be married to him and for the adventures and joy we have together. Like most people we have faced challenges too.  We both dearly want to have children and have spent over 7 years of our marriage on our journey to become parents.

In 2012, after a year of trying to conceive with no success, we sought medical help from an OB/GYN.  After several tests and procedures for us both and finding everything ‘normal’, we were later referred to a Reproductive Endocrinologist (RE) at Reproductive Care Center (RCC) in Sandy, UT, in 2013.  Further testing with ‘normal’ results, was followed by months of Clomid/Femara, then four unsuccessful Intrauterine Inseminations (IUI), followed by four egg retrievals, and four In Vitro Fertilizations (IVF) – two fresh and two frozen embryo transfer (FET) cycles.  We transferred a total of seven embryos during these IVFs and never got pregnant. We had one embryo remaining (which was later tested and confirmed normal/genetically viable).

At this time, the end of 2016, we looked for help from a different RE, at the Colorado Center of Reproductive Medicine (CCRM).  Here we completed two further egg retrieval cycles (which resulted in an additional five genetically viable embryos). Using two of these embryos we completed a further two IVF transfer cycles (brining it to a total of 6 egg retrievals and 6 transfers). We became pregnant both times.  After seeing my hCG heading positively skywards on graphs and having gone for multiple ultrasounds where we saw a growing gestational sac, we were hopeful. However, sadly the pregnancies did not progress and we miscarried at 9 weeks both times.  We remain a mystery to the doctors with a frustrating diagnosis of ‘unexplained infertility’.

With four genetically viable embryos remaining and no idea why things are not working both my OBG/YN and RE have suggested using a gestational carrier to carry one or more of these embryos.  It took me a little time to mourn the loss of being able to carry my own children and to wrap my head around using a gestational carrier, but we are now excited for this next step.

Over 7 years in and it has been quite the journey.  We calculated that to date I have taken thousands of medications and injections, and had over 100 appointments seeing doctors and other health practitioners of both Western and Eastern medicine.  Between the clomid cycles, IUIs, IVFs, mock, and biopsy cycles, I have had a total of 24 cycles with reproductive treatments/procedures! Phew. It seems exhausting just writing it.  We are still on our path to reaching our goal.  We are trying to stay strong and positive, and learn what we can throughout the process.

UPDATE: April 2019 we welcomed our beautiful daughter via Gestational Carrier. More posts to come on this amazing part of our lives.

Our Journey to Parenthood…

I stand in front of the mirror and look at my reflection, turning this way and that, imagining a soft swell in my belly.   I gently press my hand there and move it in small circles, willing our baby into existence.  Rubbing and wishing, like one would for a genie in a lamp.  Could it […]

We Are Ready For You

Two years ago I wrote about ‘Our Journey to Parenthood‘.  Now two years later, and four years of trying to conceive, our journey continues.  It is a journey of highs and lows, and incredible insights.  I believe sharing our raw emotions and lessons we’ve learned is how we connect as humans.  It can be hard to […]

Thankful for those little things….

I had a tough day yesterday.  It overwhelmed me and I got angry and frustrated. The disappointment came when we learned in an email from our fertility center that they have cancelled our third round of IVF.  They said we are going to have to delay it for at least two to four months, due to complications from […]

I step out of bed and pad across the soft carpet onto the cool tile floor.  I glance down at the calendar on my counter and next to today’s date, I see in bright pink ink the two hearts I have drawn and the words ‘ ♥ ♥ PREG TEST’.  Today is a big day for us!  I […]

How do we stay strong during disappointments and sadness? How do we stay faithful when it seems our prayers are not being answered? I drag myself along the trail. My feet plod slowly on the dusty path…thud, thud, thud. They feel like they are made of lead. My heart is heavy too, pulling me downwards […]

April 23-29, 2017 is National Infertility Awareness Week (NIAW). The CDC tells us that 15% of couples, more than 1 in 8, struggle to conceive. This seems like a surprisingly​ high number. But as I count those of my closest friends who have struggled with infertility, and run out of fingers on both hands, I […]