I recently had the opportunity to do a service project abroad – at a shelter for girls in Jamaica.  I was very excited at the prospect.  I have helped with service in my local communities before, such as visiting the elderly, fundraising events, and so on.  But until this point I had never done something of this kind overseas.

We were asked to bring items with us that would be beneficial to the girls, such as school supplies, toiletries, and bedding.  I was glad to be taking a donation by-hand to those in need and knowing our gift would get to the right people.   In a world with greed and corruption there is sometimes worry about how much aid gets to the real cause when giving to a charity.  This way would leave no doubt.

I bought my items with eagerness and anticipation; I was so enthusiastic I told the staff in the shops what they were for.  They congratulated me and said it sounded like a great cause.  I did not want to appear boastful or self-indulgent declaring my good deeds.  It is much truer to do something purely for the good of others without desire for self-promotion.  But I was so thrilled about the project I wanted others to know about it and for them to think about service projects too.  It made me think we could all do more, we could take items for those in need whenever we travelled to poor areas.  It was opening my eyes – the possibilities were endless.

We arrived in Jamaica and the day came for the project itself.  The group I was with dressed in our matching t-shirts and were transported to the shelter.  A tall perimeter chain-link fence topped with coils of rusty barbed-wire met us.  This seemed a little ominous, but the bright buildings within proved to cheer the place up, painted in the colors for which Jamaica is known – shades of canary yellow and emerald green.

Upon seeing us arrive the girls immediately ran to the fences, curling their fingers around the wire or pushing their arms through to touch us.  The scene was so moving and heartbreaking I wanted to pull out my camera straight away and capture it all.  But I held back, I thought it might seem uncouth and insensitive to immediately begin snapping away.  The principal of the school greeted us and spoke about the shelter.  The girls were here for their own safety and in custody of the state.  Their stories were tragic – of abuse and neglect.

During our visit we were given the option to spend time interacting with the girls, or to put our man-power to use in building a goat enclosure or rabbit hutches, to enable the girls to take care of these animals, as part of a 4-H youth-development program they were doing.   I began with building, but after helping dig a few holes and trim some fencing, I wanted to be with the girls.  I have a fondness for children and an affinity to those of an age many of the girls in the shelter were.  I left the bright Jamaican sunlight and headed down the dusty steps into their rudimentary building. 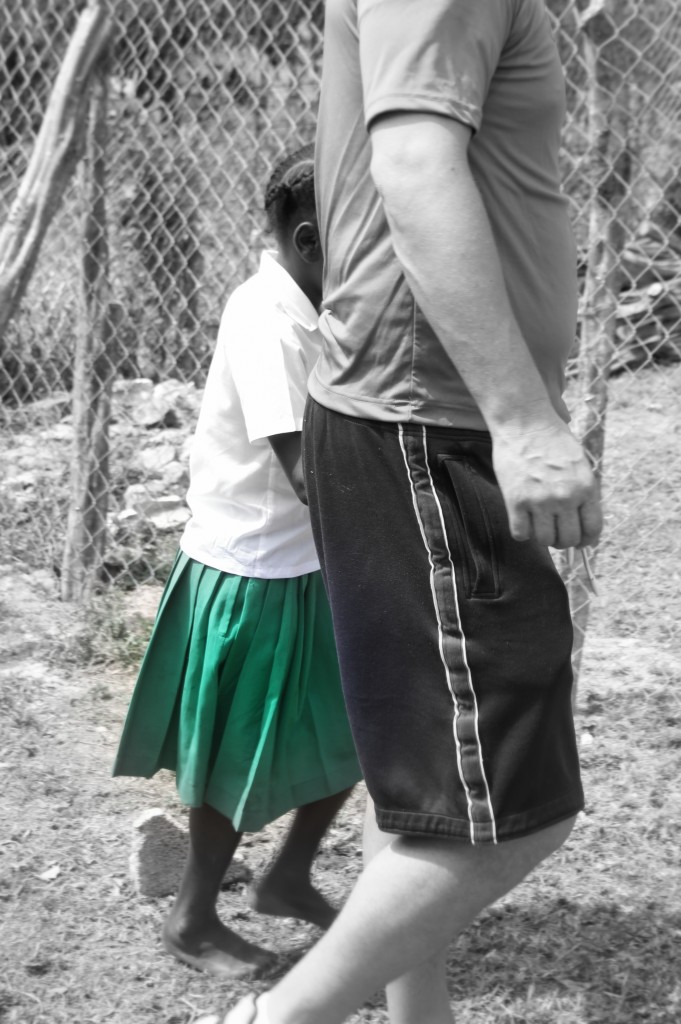 Spending time with the girls at a shelter in Jamaica.

Some of the girls were showing the visitors their sewing projects, others were at computers.  They were intrigued by technology, drawn to the phones and cameras carried by many of us – wanting to hold them and use them.  Girls were crowded round iPhones listening to music or playing games.  Others were snapping away photos on recently borrowed cameras. This made me nervous.  I had seen a friend’s camera dropped by a tourist that morning and I didn’t want the same thing to happen to mine.  It is expensive and I am protective of it.  I tentatively let one of the girls take some photos, but soon wanted it back in my possession.

It is interesting the concept of possessions.  Many of us have an abundance of them and we take them for granted.  The girls had very little.  I noticed they were keen both to look at and use our possessions  but also to see what they could acquire.  Some of the girls asked if they might have their visitor’s sunglasses for example, or did we have any money we could give them?  One of the girls told people it was her birthday to see if they had anything they could give her.  I gave her the food I had with me, others gave her their belongings or dollars (although we were asked to avoid this as it would cause battles between the girls).

The skeptic in me wondered if it really was her birthday.  I felt disheartened and frustrated by the keenness of the girls to get things from us, and also felt defensive of my belongings.  I had envisioned spending time chatting with these young ladies, learning about them, playing, and perhaps teaching them something.  But it was not panning out like I had imagined.  It led me to think that my time was better spent outside helping build something for the girls so as to leave something physical and lasting for them, or capturing photos of the project, which is what I returned to do.

After I left the shelter I had conflicted feelings.  I was pleased I could help with the project, but sad at my interactions with the girls.  But after reflecting and chatting to other visitors, it made me open my eyes and heart to what had happened.  I saw things differently.  I shouldn’t have judged the girls.  They had almost nothing of their own, no home and family, and had suffered neglect or abuse.  Life was not easy for them.  They had likely just learned to get things where and when they could.  They were desperate for something to call their own.  And perhaps it was a matter of survival for them.

I thought about how much of my time at the shelter I was capturing photos, and I am glad to have these for myself and others to remember the project by, but I wished for more of the time I had put my camera and wallet away, if I was worried about them, and really just engaged and interacted with the girls.  I wished I had talked to them more and got to know them.  I realized that visiting the girls at the shelter did me a service too.  It helped remind me not to judge people, to think beyond what is before me, to open my eyes and heart to others, and to be present and real with those around me.   I am thankful for this and look forward to my next service project with my eyes and heart open.

Since writing this post, I read something on the topic of frustration that made me think.  It was in Olympian Derek Parra’s book Reflections In The Ice “Frustration occurs when our results don’t match our expectations.  We experience frustration because we expect better.”  It made me think about my frustrations that day with the girls and their behavior, and my subsequent berating of myself for feeling frustrated with them.  I had come to terms with why the girls acted like they did, but I had not fully done so with myself.  In thinking about Derek’s comments, I realized that I could ease up on myself.  I acknowledge that my feelings of frustration were because I wanted my contact with the girls to go better.  My frustrations were coming from a good place – it was because I cared. 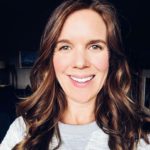