Last evening I watched the movie The Cove.  It is a 2009 documentary film directed by Louie Psihoyos, which analyzes and questions Japan’s dolphin hunting culture.  The film was awarded the Academy Award for Best Documentary Feature in 2010.   I had heard from friends that it is thought-provoking and worth watching.  I knew little more than it was about dolphins and tragic.

Like many documentaries, and indeed almost all information presented to us, I understand there to be an element of bias based on the opinions of the author, or in this case film-maker.  I always try and take this into account.  In fact I think I have a higher than usual tendency towards skepticism.  (Perhaps it is from my statistics background.  I’ve always felt that statistics can show anything you want it to, and as Mark Twain once said “There are lies, damned lies, and statistics.”)  I’ve watched multiple documentaries where people leave criticizing the film maker, such as Michael Moore’s Sicko.  However, I find documentaries fascinating, and despite their varying degrees of bias, they give me something to think upon and a base to find out more information, and form my own opinion.

The Cove left me with lots to think about.  My over-riding feeling was absolute shock and horror at the brutal killing of so many dolphins and pilot whales in Taiji, Japan.  I sat in my instinctual pose at seeing something horrific – my hands covering my dropped jaw, or at the worse moments, my eyes.  Seeing the usual dark blue color of the ocean turn a vivid opaque red from the dolphins spilled blood, as if gallons of paint had been dumped into it, will stick in my memory forever.  It was heartbreaking watching these mammals being herded, confused and panicked, from their migratory routes to their death by boats creating a loud and constant sound barrier (through banging on metal poles stuck into the ocean).  Then to see them thrash and squeal as they were speared and bludgeoned, and dragged by their tails to shore. 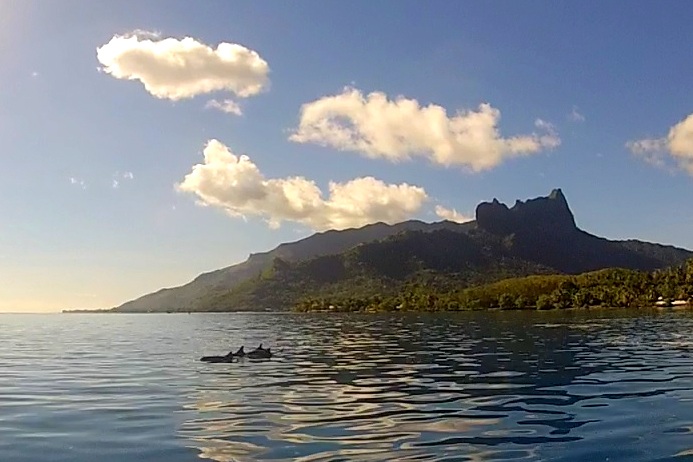 Activists in the film The Cove try to protect dolphins.  I had the pleasure of spending time with dolphins in the wild while on my paddleboard in Tahiti.

This barbaric killing deeply bothered me.  I reminded myself that as a carnivore I eat other types of meat (cow, pig, sheep, chicken), and they too likely have distressing deaths.  Thus it would seem hypocritical of me to judge the Japanese fishermen for killing dolphins.  However, rightly or wrongly, I place a different value on the lives of different species.  I think little of swatting a fly or wasp, but cruelty to more intelligent animals sorrows me.  Dolphins are said to be incredibly intelligent and conscious/self-aware, thus their deaths seem worse.  But I understand that pigs are very smart too, perhaps even as smart as horses, and not far behind dogs and cats.   Why is it then, that I find the death of pigs tolerable enough to eat their meat? Or cows, sheep, and chicken for that matter?

Humans seem to view or rank animals based on a scale, with those domesticated being higher on the totem pole.  Our view is probably swayed by media representation of animals too, with certain animals (e.g. sharks and rats) having a bad rap, and other, perhaps cuter, animals (e.g. dolphins) being revered.  Maybe I should take a leaf out of a Buddhist’s book.  They view all lives as sacred.  From The Dhammapada, verses 129-130 “All beings tremble before danger, all fear death. When a man considers this, he does not kill or cause to kill.” Dwelling on this makes me feel badly for eating any meat.

This brings me to whether and how to act on our feelings.  How many times have we seen shocking things and turned a blind eye or not acted and gone about our day?  In the movie The Cove Louie Psihoyos said at one point in the film, “To me, you’re either an activist or an inactivist.”  That hit home to me.  That sentiment does not allow us to be a spectator, to sit by.  By not acting we are an in-acting.  If something moves you, touches you, shocks you – do something about it.  The movie also quotes Margaret Mead, American cultural anthropologist, who said “Never ever depend on governments or institutions to solve any major problems. All social change comes from the passion of individuals.”  We have the power to make a difference.  I hope to make a difference in life in my own way.